Next up, we have been reading about western expansion during the first half of the 19th century. The books below cover the Lewis and Clark Expedition (e.g. Seaman’s Journey and Sacagawea), the Indian Removal Act of 1830 (e.g. Soft Rain and The Trail of Tears) and European settlers’ journeys west (e.g. Elsie’s Bird and Apples to Oregon). 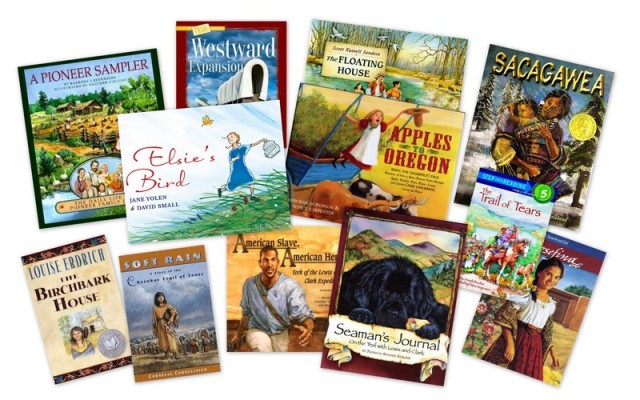 There is no one correct way to divide up U.S. history. I considered including books about slavery on this booklist. During the first half of the 19th century, slavery expanded rapidly. It has always felt a bit misleading to separate the subjects of westward expansion and slavery by theme when they occurred at the same time. In doing so, slavery is introduced at the same time that we discuss the abolition of slavery, when, in reality, Europeans began importing slaves during the colonial period. Despite these reservations, I too have decided to include books about slavery in a separate booklist — Read Through History V — to make the two booklists coherent.

The Floating House by Scott Russell Sanders and Helen Cogancherry. The Floating House is a fictional story about a family who travels west in 1815 via houseboat. The McClure family begins their journey in Pittsburg, Pennsylvania, and floats down the Ohio River until they reach their destination in Eastern Indiana. This story illustrates that Kentucky and Indiana were once the western frontier and that some settlers travelled west by boat rather than wagon. Ages 4+

Elsie’s Bird by Jane Yolen and David Small. After Elsie’s mother dies, Elsie’s father decides to leave Boston, where their family had been living, and head west. Elsie and her father board a train bound for the Nebraska prairie. At first, Elsie finds the prairie lonely and unbearably quiet. One day, Elsie begins to hear the sounds of the prairie, and her and her father’s homestead begins to feel like home. Ages 4+

Apples to Oregon by Deborah Hopkinson and Nancy Carpenter. A rollicking story about a family that transports a wagon-load of fruit trees west along the Oregon Trail. On one hand, this story’s humor seems out-of-place when one considers the very real hardships settlers endured on the Oregon Trail. On the other hand, Apples to Oregon is very entertaining and offers memorable descriptions of the main obstacles faced by settlers. This book is a new favorite of all three of my children, who keep quoting the book’s apple puns. Ages 4+

Cassie’s Journey: Going West in the 1860s by Brett Harvey and Deborah Kogan Ray. In contrast to the previous three books on this list, Cassie’s Journey offers a more realistic description of the hardships faced by settlers traveling west. Ages 6+

The Trail of Tears by Joseph Bruchac and Diana Magnuson. Following the passage of the Indian Removal Act of 1830, several groups of Native Americans, including the Cherokee, were forced to relocated. In The Trail of Tears, Bruchac tells the true story of the Cherokee Nation’s forced removal from the land that is now known as Georgia, Alabama, Tennessee, Kentucky, South Carolina and North Carolina. Ages 7+

A Pioneer Sampler: The Daily Life of a Pioneer Family in 1840 by Barbara Greenwood and Heather Collins. A Pioneer Sampler introduces readers to a fictional family, the Robertson’s. Short stories about the Robertson family are interspersed with essays about a variety of subjects including sending a letter, carding and spinning wool, making maple syrup etc. This format is a fantastic, engaging way to teach kids about pioneer life. A Pioneer Sampler also includes activities for kids. Ages 7+

A TRUE Book: Westward Expansion by Teresa Domnauer. An excellent, succinct overview of a major theme in United States history. Westward Expansion explains why European settlers headed west and describes the conflicts that arose between Native Americans and settlers. It introduces readers to key figures and events such as Daniel Boone, the Northwest Territory and the Indian Removal Act. Ages 7+

Buffalo Before Breakfast by Mary Pope Osborne. In this Magic Tree House book, Jack and Annie travel 200 years back in time to the Great Plains. They meet Black Hawk and see the large herds of buffalo that once roamed the plains. Ages 5+

Meet Josephina by Valerie Tripp. The first in a series of stories about a ten-year-old Hispanic girl who lives in New Mexico in 1824. Ages 6+

Westward to Home: Joshua’s Oregon Trail Diary by Patricia Hermes. Told in diary format, the story of a boy who travels west with his family along the Oregon Trail. Ages 7+

Soft Rain: A Story of the Cherokee Trail of Tears by Cornelia Cornelissen. The story of a 9-year-old Cherokee girl forced to relocate from her home out West. Ages 8+

My kids’ favorite books on this booklist are Elsie’s Bird by Jane Yolen, Apples to Oregon by Deborah Hopkinson, and (although not visible in this picture) The Floating House by Scott Russell Sanders. In addition, they have not yet read a Magic Tree House book or American Girl book they did not love. This week, Buffalo Before Breakfast by Mary Pope Osborne and the Josephina American Girl series did not disappoint.