eBook Recommendations From an eBook Skeptic

This summer, faced with the prospect of spending four days in the car with my three young kids ages 2, 5, and 7, I took the plunge and purchased not one but two e-readers: a Nook for reading chapter books and an iPad for reading picture books.

Our entire family has quickly been won over by the Nook. Chapter books transfer pretty slickly to e-readers and retain their identity as books. In contrast, picture books transformed into book apps look less like books. Picture book apps are a new beast that raise a slough of interesting questions: Are book apps, like books, something that I should encourage my kids to read? Or, are book apps, like TV and video games, something that I should restrict my kids’ access to? If I do allow my kids to read book apps, which book apps should I choose? 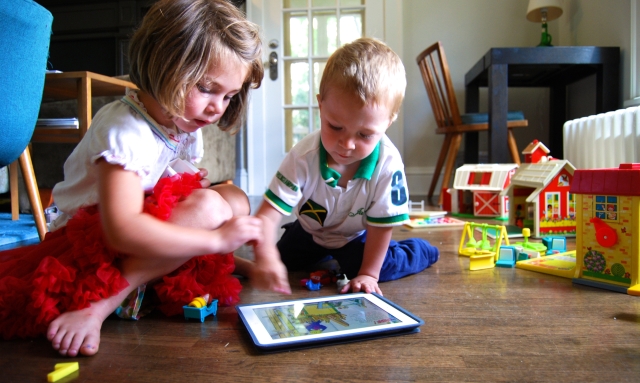 For those of you who have not seen book apps, at their simplest book apps consist of picture book illustrations displayed on a screen with a narrator reading in the background. Kids turn the pages of these books by pushing buttons or swiping their fingers across the pages. While it is possible for kids to turn the narration off and read the books themselves, my kids, including my 7-year-old who is a terrific reader, absolutely never do so. Thus, at their simplest, these books are akin to the read-along picture books that I read as a kid – only a lot slicker. Parents no longer have to fumble with records or CDs.

As app developers add animation and interactive features to book apps, book apps begin to look less and less like books. For example, in the e-book version of The Monster at the End of This Book, Grover is a fully animated character talking to kids, with a book merely serving as a backdrop to his antics. In the e-book version of Harold and the Purple Crayon, Harold is an animated character walking and blinking his way through the world he is drawing with his purple crayon. In the e-book Bizzy Bear Builds a House, a story about a bear working at a construction site, readers push buttons and swipe their finger across the screen to make Bizzy Bear dig a hole, pile sand, unload bricks, etc.

The main feature that seems to distinguish book apps from videos or game apps is the fact that book apps include text from a book on each screen. However, to kids who cannot yet read, like my youngest son and daughter, this text must seem like a meaningless distraction. Recognizing that the text in e-books is superfluous and interferes with the illustrations, the developers of the book app The Book about Moomin, Mymble & Little My have simply done away with the text. (Readers have the option of tapping buttons on each screen to make the text appear.)

From Harold and The Purple Crayon

Should I restrict my kids’ access to book apps?

Many of the reasons for restricting children’s access to TV and video games seem to apply to book apps as well. The American Academy of Pediatrics and proponents of Screen Free Week warn parents that replacing unstructured playtime with screen time may impede brain development and leave us with kids with short attention spans and an inability to entertain themselves. In addition, time spent staring at bright screens before bedtime disrupts children’s sleep. For those with kids under two, replacing “talk time” (time spent interacting with real people) with “screen time” can cause delays in language aquisition.

Research scientists have not yet studied the effects of iPad time on children’s brain development, language acquisition, sleep habits, attention spans or ability to entertain themselves. However, the research that has been done on the value of unstructured play and time spent interacting with people makes me hesitant to hand an iPad to my kids the minute they appear bored.

In the name of research, I have let my kids have fairly unfettered access to book apps this past month, and I have come to the conclusion that I need to restrict their access to our iPad to some degree. I find it far too easy to let iPad time unintentionally replace time we would otherwise spend reading books or playing.

On the other hand, book apps are an excellent option for entertaining kids on road trips. Book apps may be valuable for sneaking more storytime into the lives of kids who do not have adults reading one-on-one to them. Book apps available in multiple languages seem like a neat tool for helping teach kids new languages. Lastly, book apps are excellent for telling stories that include song or sound as an integral part of the story. I would love to see book apps created for The Jazz Fly by Matthew Gollub, Ben’s Trumpet by Rachel Isadora and Zin, Zin, Zin a Violin by Moss Lloyd.

From Clara Button and The Magical Hat Day

What makes a good book app?

When choosing book apps to share with my kids, I first consider how a book app’s story and illustrations stack up against those of books that I enjoy reading with the kids. The qualities that make a book app great are the same qualities that make a picture book great – a good story and beautiful illustrations. Thus far, the selection of book apps available is limited, and many of the book apps available do not compare to the amazing picture books available for free at our local library.

Next, I note whether the book app includes interactive features that detract from the story. Research has shown that including interactive features in book apps can interfere with children’s ability to recall the book app’s storyline. This research merely confirms what is obvious from watching my kids play with book apps. When my kids stop midway through a book to spend a couple minutes pushing buttons to make a character do jumping jacks, the flow of the story is lost.

The  best book apps add value to books when translating them from print to digital media. Excellent book apps — and at this point excellent book apps are a rare breed — feature a fantastic narrator, have illustrations that look beautiful backlit, offer readers the option of hearing the book read in another language, or include music or sound effects that add to rather than detract from the story.

Ten of the best book apps that have been developed thus far:

Dr. Seuss Beginner Book Collection #1 by Oceanhouse Media. A collection of five classic Dr. Seuss stories for kids learning to read: The Cat in the Hat, The Foot Book, One Fish Two Fish Red Fish Blue Fish, Fox in Socks, and Mr. Brown Can Moo! Can You?. Dr. Seuss’s easy readers are a perfect match for the iPad. Kids’ attention spans for these repetitive stories often exceed those of their parents, and, on the iPad, kids can read these as many times as they want. To help teach kids to read, kids can touch words to have them read aloud. Dr. Seuss’s illustrations look like they were made to be displayed on a glowing screen. They are really beautiful. The developers did not slice and dice the illustrations and make characters wiggle around unnecessarily. Instead, they opted for a simple Ken Burns effect.

Cinderella by Nosy Crow. This humorous rendition of the classic fairy tale is cholk-full of impressive interactive features. I love that in this version of Cinderella, Cinderella’s step sisters’ wickedness is tempered and the prince is a good and gentle prince who enjoys playing ping pong. Readers touch the characters to make them speak, and the hilarious dialog adds to rather than disrupts the story.

Harold and the Purple Crayon by Trilogy Studios. A story about a young boy Harold who takes a walk in the moonlight through a world he creates with a purple crayon and his imagination. Crockett Johnson’s original Harold and the Purple Crayon charms in large part because of its simplicity. On one hand, the decision to animate Harold in this book app runs counter to the original book. On the other hand, I like this book app because the interactive features draw the reader into the story. Readers are invited to draw the moon, the path, etc. with their finger. I wonder what Crockett Johnson would have thought of this book app.

Fierce Grey Mouse by Tizio BV. The story of a little grey mouse who goes to great lengths to become fierce. While little mouse at first enjoys being fierce, he soon scares his friends away and becomes lonely. Fierce Grey Mouse features beautiful collage illustrations and typography. Readers can touch little mouse and the other characters to see them run, roar and pounce. Readers can also choose to listen to this book read in a variety of languages and accents.

The Monster at the End of This Book by Sesame Street. After learning that there is a monster at the end of the book, Grover goes to great lengths to keep readers from turning the book’s pages. Grover ties pages shut, nails them shut, and builds a brick wall barricade. Kids can untie knots and make brick walls crumble by simply touching the screen. It took my 2 and 5-year-old several readings to learn to navigate this book app and catch onto the joke. They now think this book is hilarious.

Clara Button and the Magical Hat Day by MAPP Editions Ltd. When Clara’s Aunt Elsie’s hat is broken, Clara visits the Victoria and Albert Museum — a London museum of art and design — to find a milliner to mend it. Produced in partnership with the Victoria and Albert Museum, this book app does a fantastic job of introducing kids to an art museum. Clara Button and the Magical Hat Day features lovely illustrations. Buttons hidden on each page contribute to the magical feel of Clara’a adventures. The focus of this book app remains on the story. At the end of the book, kids can push on images of objects in the museum’s collection to learn more about them and see photographs.

Harry the Dirty Dog by Gene Zion and Margaret Bloy Graham, available in iBooks. The story of a dog Harry who gets so dirty that his owners no longer recognize him. The graphic illustrations look great on the iPad. Interactive features were added sparingly. At one point, readers can touch the screen to cover Harry with splotches of mud.

The Franklin series by Paulette Bourgeois, available in iBooks. These e-books make the list because Franklin stories are solid (one of my favorite series for young readers), the author Paulette Bourgeois does a great job of narrating, and the developers chose nice, unobtrusive background music. While reviews frequently criticize book apps like this one for not including interactive features, I see nothing wrong with this approach to creating book apps. To the contrary, I hope many more excellent picture books are translated to book app as straightforwardly and as well as the Franklin books have been.

6 Responses to eBook Recommendations From an eBook Skeptic